The City of Pontiac honors all of its citizen soldiers who served the nation faithfully during the American Civil War. Livingston County and the City have memorials that demonstrate the regard we still have for those men. To learn more about the two statues, visit the Civil War Memorials page. A few of the men who fought for the Union between 1861 and 1865 are remembered below.  We hope you find their stories inspiring.

One of the most remarkable stories about Pontiac during the Civil War concerns the women and children who remained behind. For the duration of the war, those women and young children ran many of the town's businesses, planted and harvested fields of grain year after year, managed livestock, raised the youngest children and cared for the elderly and the sick, and somehow, kept their families and the life of the city of Pontiac functioning in the absence of most of the town's men. As was often the case in many small towns on both sides of the conflict, women and teenage children accepted responsibilities often far beyond their experience. They sacrificed much during the war and are true, but often unrecognized, home front heroes. 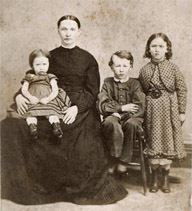 Henry B. Reed was born in Pennsylvania in 1833. He grew up there, and as a young man apprenticed to a shoemaker. As he matured, he started his own small shoe making factory in Pennsylvania in 1852. He sold his factory and moved to the Bloomington, Illinois area with his family in 1855. As leader of the political group called the "Wide-Awakes," he visited Pontiac promoting Lincoln during the 1858 Senatorial campaign. He liked what he found in Pontiac, and the next year moved his family to our small community. 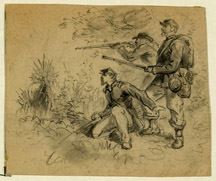 As soon as President Lincoln put out his call for 3 year volunteers, Reed was the first man from the City of Pontiac to volunteer.  Reed immediately went to Joliet, Illinois and joined Company D of the 20th Illinois Infantry as a Sergeant. He fought at the battle of Fort Donelson (February 12 - 16, 1862), where he was promoted to Lieutenant. He then resigned from the 20th Illinois and returned to Pontiac. Reed returned home to play an important role as one of the experienced military men driving the formation of the 129th Illinois Infantry, the new regiment that was created and trained in Pontiac. As a Captain in the 129th, Reed took part in a number of battles, spent time guarding railroads and bridges, and was part of Sherman's army that marched to the sea. Captain Reed was much appreciated by the men in the 129th. The men in Reed's unit were gratified to see that Reed, unlike some Union officers, was sincerely concerned about the average solider's clothing, provisions, weaponry, and general health. In his quiet, but effectual way, Reed made sure that the men who served under him were treated as well as conditions of war would allow. The respect and admiration Reed earned in camp and on the battlefield carried over into his civilian life, and he was called "Captain Reed" by his friends here in Pontiac long after the end of the war.

Reed returned to Pontiac after the war, and once again entered into the shoe business. However, his health began to decline, and he was forced to retire. He was later appointed by consecutive Illinois governors to care for the Memorial Hall in Springfield, a political appointment that recognized his service to his nation and the Republican party. He and his wife had nine children, of which six survived into adulthood. Captain Reed died Tuesday, February 5, 1901 in Pontiac.

Dennis McDonald came to Pontiac from Kentucky as a child with his family a few years before the war. Although Kentucky was nominally a Union state, it was a border state and had many Confederate supporters. When the war broke out, Dennis' father, who still had family and many friends in his home state, supported the Confederacy. Mr. McDonald returned to the south with all of his family, except for the 16-year-old Dennis.

Dennis, who supported the preservation of the Union, joined the 53rd Illinois Volunteer Infantry at Ottawa early in 1862. He took part in the Battle of Shiloh where he fought against his father who had joined the Confederate Army. The young soldier was captured at Shiloh, and was eventually sent to the notorious Andersonville prisoner of war camp in Georgia. He survived the war, and upon release from Andersonville, returned to Pontiac. McDonald worked for a time in the Pontiac coal mine, but the mismanagement of the enterprise led him to seek new opportunities. In 1872, McDonald moved to a newly created mining town in southern Illinois, called Carrier Mills. He worked in the mines there until his health and advancing years forced his retirement.

Dennis McDonald, who had survived Andersonville and years of hard, unhealthy labor in a coal mine, lived to be the last surviving Civil War veteran from Pontiac.  He died in 1945 at the age of 100. 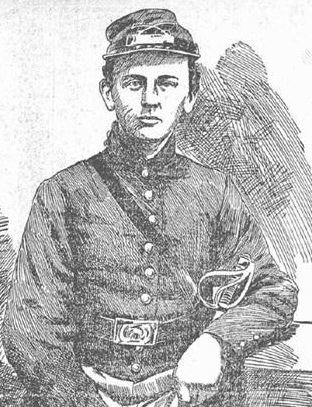 Albert D.J. Cashier, born Jennie Hodgers, was a woman who lived most of her adult life, including her Civil War service, as a man. Surprisingly perhaps, it was not rare for women on both sides of the war to try to pass as men. And although some women adopted a male disguise to be near and to protect the man she loved, others, like Jennie, shared the same reasons as the most of the men who had enlisted: patriotism, adventurism, or a combination of the two. Cashier's story of military life as a man has been the subject of several books, numerous articles, and recently (2017), a Chicago-based, musical theater production. Here we will provide a just short outline of the remarkable Jennie Hodgers / Albert Cashier story. 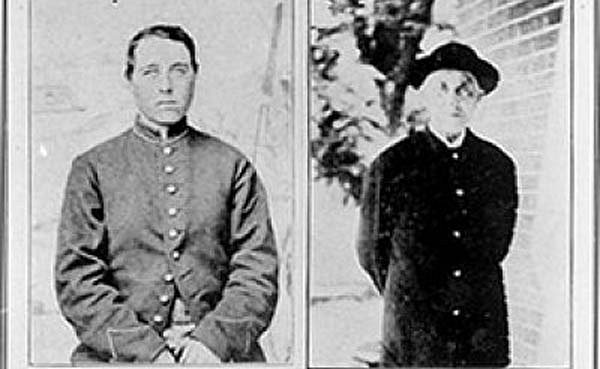 Jennie was born in Ireland in 1843. Although not much is known of Jennie's early life, it is known that her mother died when she was yet a toddler, and she was raised by her father and other relatives. She grew into an independent, adventurous, but shy young girl. Sometime in the late 1850s or early 1860s, Jennie stowed away on a ship headed to the USA. She eventually made her way west and by 1862 had settled in Belvidere, Illinois. She had already adopted her male disguise by that time, probably because a young, unaccompanied woman on her own in that time and place would have to face many disadvantages and much public suspicion. Jennie enlisted for three years service, taking the name, Albert D.J. Cashier. As part of the 95th Illinois Infantry, Albert was mustered into Union service on September  4, 1862.

During the time of his military service, Pvt. Albert Cashier fought in approximately 40 battles, including Vicksburg. Albert's fellow soldiers considered him a brave and capable soldier, although prone to seek his privacy while in camp. At Vicksburg, Albert's true identity was nearly discovered when he was captured by a Confederate soldier. Fearing both prison camp and detection, the diminutive Albert (just 5' 3" tall), grabbed the barrel of his guard's rifle, pushed the butt end of the weapon hard into the rebel's stomach, knocking the guard to the ground, and then took off at a run through some nearby woods, escaping back to the relative safety of the Union lines.

Another close call for the disguised female came shortly after Vicksburg when a severe case of diarrhea, a common complaint among the soldiers on both sides of the conflict, required a stay in a military hospital. Amazingly, Cashier recovered from the illness without the military hospital's doctors or nurses ever learning her/his true biological sex.

In total, Albert served in the Union army for 2 years, 11 months, and 13 days. He was honorably discharged from service on August 17, 1865. Albert returned to Belvidere, and then moved to the Pontiac area in search of work. Eventually, Albert settled in the tiny village of Saunemin, Illinois - about 12 miles east of Pontiac. There Albert quietly lived on his military pension and worked as the janitor for a local church. He did odd-jobs for neighbors, and also served as the village of Saunemin's street lamplighter. In 1910, Albert was accidentally struck by a car, breaking his leg.  While receiving medical care for the injury, his true sex was discovered. The local doctor and nurse assured Albert that they would keep his secret, and they did. Eventually, however, Albert's physical and mental health began to deteriorate. In May of 1911 he was admitted into the Illinois Soldiers and Sailors Home where his biological sex was officially discovered. It is said that when the staff attempted to force Albert to wear women's clothing, he fought them tooth and nail. Finally after suffering a complete mental breakdown, Albert/Jennie was declared insane and later died on October 10, 1915.

Albert Cashier was buried in his Civil War uniform, which he had kept over all those years.  He was honored with full military ceremonies at his burial in Saunemin. His/her tombstone lists both identities - Pvt. Albert D.J. Cashier and Jennie Hodgers.

Joseph F. Culver was born in Pennsylvania on March 17, 1842. He moved to Pontiac in 1858 or 1859. His military service was similar to that of many from the area, taking part in many battles including the March to the Sea.  He was First Lieutenant in the 129th Illinois Volunteer Infantry, having enlisted on August 2, 1862 and was subsequently promoted to Captain. What makes Captain Culver's story interesting is the fact that Culver was a prodigious letter writer and his wife, Mary, kept most of those letters. The Culver letters are in the collection of the University of Iowa Library, and in 1978 a book that contained 233 of the letters was published by the Friends of the Library. Those letters were received by Mary over a period of time between August 8, 1862 and June 5, 1865. 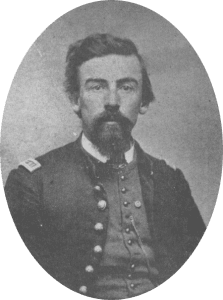 Culver's letters home detail the day to day activities of his unit of the 129th, and so provide a view of the war from the perspective of the active duty troops, whether on the battle line or behind it in more secure support positions. His letters also respond to Mary's correspondence containing both good and tragic news from Pontiac and of his family and friends. For example, on September 21, 1862, while he was away In Kentucky with the Union Army, Culver's first child, a son named Franklin Allen Culver, was born. Sadly, on October 31, 1863, while serving in Tennessee, Culver was informed by telegraph of 13-month-old "little Frankie's" death. A few of his most poignant letters mourn the child he never met, while at the same time expressing his faith in God's will, and consoling his grieving wife. Other letters discuss military matters, relate the exploits of Pontiac citizens serving in the same unit, and such war rumors as were deemed noteworthy by Culver. One of the most interesting series of letters details the range of reactions experienced by the men in the field when they learned of Lincoln's death. Because Lincoln was known to many in Pontiac and thus to many of the soldiers serving in the 129th, his assassination came as a particularly strong shock for the men of the unit. Culver's letters tell of the confusion, concern, and desire for revenge that the news of the President's assassination provoked among the boys from the Pontiac and Livingston County-based 129th Infantry Regiment.

After the war, Culver returned to Pontiac, ran a successful law office, served as Mayor of Pontiac for a time, and was elected a Livingston County Judge. In 1879, Culver and his family moved to Kansas where he once again took up the law. He died in 1899.  His body was returned to Pontiac and he was laid to rest in the South Side Cemetery.

If you wish to read Culver's letters, here is the book information: