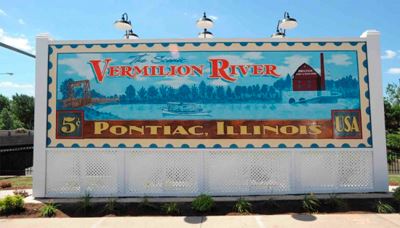 The Vermilion River flows in a northerly direction from its origin in Livingston and Ford Counties in north central Illinois, eventually emptying into the Illinois River, near Oglesby.
The building depicted on the right of the mural was known as the Williams' Mill. The mill was built sometime before the Civil War and operated until fire destroyed the interior in 1955. It was demolished in 1957.
The Vermillion River, at one point in our history, powered 5 different mills here in Pontiac. There were three grist mills, a lumber mill, and a woolen mill.
The swinging bridge pictured on the left of the mual is another distinguishing feature of Pontiac. The first 2 bridges were built in the early 1900s for the practical purpose of getting workers from the south side of town to factories on the north side. The 3rd bridge was finished in 1980 and was built for recreational and aesthetic value.