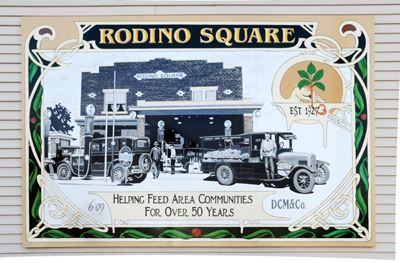 Rodino Square was built in 1927 by Carmen Rodino as a full service stop with a grocery and liquor store, hotel, restaurant, tavern, gas and automobile service station. He picked a site which was situated along a road that became part of Route 66.
Carmen, his wife, and 6 children planted large vegetable gardens each year and the produce which was grown there was sold to townspeople in the family's grocery store, or from the back Carmen's Model T Truck.  Mr. Rodino would drive through the neighborhoods of Pontiac, stop his truck in the middle of the block, announce his presence with a couple of blasts of his "Aoooga, Aoooga" horn, and then be open for business with fresh veggies for the housewives to buy.  He drove his truck route into the early 1960s, and the grocery closed in 1978. During the heyday of Route 66, Rodino Square was busy service stop.

This mural was designed by Dale Manor, of Oak Creek, Wisconsin where he works as a model maker for Waterloo Industries.