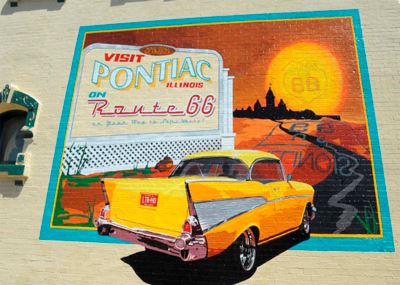 Route 66 is probably the most well-known road in this country, if not the world. Created in 1926, along with the rest of the federal highway system, it existed until 1985 when it was decommissioned, and replaced by interstate highways. In the time between, America's Mother Road earned a home for itself in the hearts and memories of people across the country.
The road passed through 8 states: Illinois, Missouri, Kansas, Oklahoma, Texas, New Mexico, Arizona, and California. Illinois was the first state to have its section completely hard surfaced. It was also the first state to replace the old road with the new Interstate.
Pontiac is home to the Route 66 Association of Illinois' Hall of Fame and Museum.

The mural was designed by Tom and Kathy Durham of St. Louis Missouri.