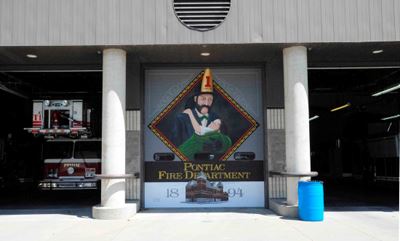 Fire protection for the City of Pontiac can be traced back, in one form or another, to June 18, 1865 with the creation of a fire prevention program charged with the inspection of chimneys and flues.
.

On June 26, 1874, a hose company was formed, later to be known as the Clark Hose Company.  In 1877, the Pontiac Fire Department was established with the appointment of a force of 45 “able-bodied” citizens to serve as Volunteer Firemen. The first fire station was located on the east side of the square at Main and Washington. The station was later moved to the west side of the square. The department purchased equipment over the years and relied on volunteer members to respond to local conflagrations and emergencies. During this period, the department was reorganized many times.


The Clark Hose Company protected the city of Pontiac to some extent ever since. On July 1, 1894, the hose company was dissolved and the first Fire Chief of the modern city fire department was appointed. It was at this same time that the City of Pontiac took on the responsibility for fire protection and emergency response.  The Clark Hose Company assumed the supportive role as the firefighters' association.

Today, the City of Pontiac Fire Department responds to over 1,500 calls per year, and is served by 13 full-time members and 12 paid-on-call members.

This mural was designed by Stephan Connor of Blackstone, IL.