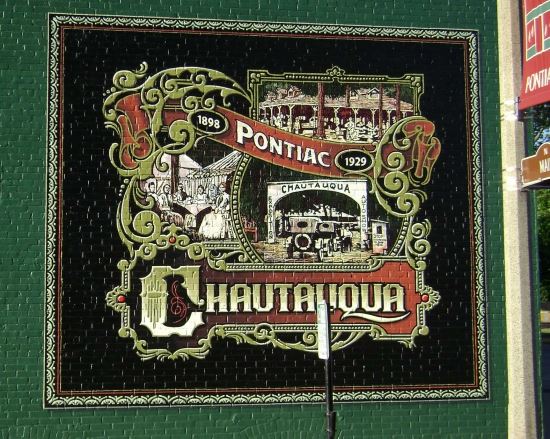 The Chautauqua institution began in the summer of 1874 at Fair Point on Lake Chautauqua, NY. The Chautauqua brought entertainment and culture for the whole community with speakers, teachers, musicians, entertainers, preachers, and specialists of the day. The immediate success of the original Chautauqua Assembly led to the creation of similar events in other states.
The First Pontiac Chautauqua assembly opened on July 29, 1898 at Riverside Park on the Vermilion River. The original 13-day event was a huge success, and the Pontiac Chautauqua continued as one of the country's most exciting and comprehensive Chautauqua assemblies for over 30 years.

You can learn more about the Chautauqua Assembly movement at our Local History Pages.

The mural was designed by David and Susie Butler and Dan Sawatzky.