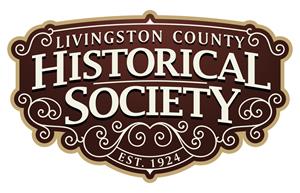 Our History
According to Livingston County Historical Society: Its Beginning and Some Later Years, by J. Paul Yost, published in 1985, the origins of the society can be found at a Kiwanis Club meeting that took place on September 25, 1924. At that meeting a presentation was given on early Native American history in Livingston County. A motion was made following the presentation which called for the creation of a committee dedicated to the preservation of local history. A certificate of incorporation was subsequently filed with the State of Illinois and the Livingston County Historical Society was formally chartered. Soon afterwards, a meeting of all interested parties was called and a permanent organization was started.

The Rev. Dr. John H. Ryan was elected as the first president of the society. A constitution and by-laws were adopted at later meetings and plans were discussed, approved, and put into action to make the society an integral part of Livingston County's efforts to discover and preserve local history.

One of our society's first significant accomplishments was the design, creation, and placement of a memorial dedicated to honoring the City of Pontiac's namesake. On Saturday, September 29, 1936, an arrowhead shaped monument was unveiled on the grounds of the Livingston County Court House. The memorial is dedicated to the famous Ottawa war chief, Pontiac. The stones used in the edifice were gathered locally, and the bronze plaques were cast at the Pontiac Reformatory. 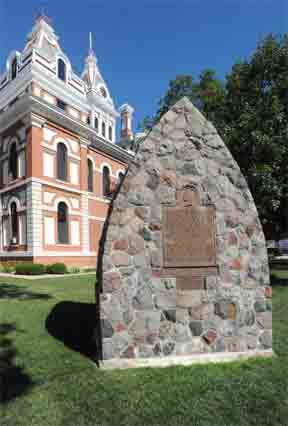 Contact Us
Bob Sear - Society President
Mailing Address:
115 West. Howard St.
Pontiac, IL  61764
Phone: (815) 844-5847
Fax: (815) 842-3885
Email Us
Join Us at a Meeting!
The Historical Society Meets
on the fourth Thursday of the month.  Meeting are typically held in City Council Chambers,
115 W. Howard St.
The plaque reads:  "Pontiac, organizer of the conspiracy which bears his name, was born on the Maumee River in what is now Ohio, in 1720.  As Chief he led the Ottawa and Chippewa Indians at Braddock's defeat July 9, 1755.  When France surrendered Canada to the English, Pontiac made peace with the new rulers, but later enraged by his treatment from the British, he organized the Northwest Tribes into a united and simultaneous attack on the British posts, choosing for himself to take Detroit in May 1765.  All the Western posts were taken except Detroit and Fort Pitt.  The conspiracy failing with these defeats, Pontiac came west to organize the Illinois and Mississippi tribes into another uprising, but failed.  Four years later he was killed by an Indian near Cahokia.  In strength of mind and breadth of vision, Pontiac ranks among the great leaders of his race.  The City of Pontiac is named for this intrepid warrior.  In 1837, Jesse W. Fell, a distinguished citizen of Illinois, who was associated with many activities in the early history of this city, was requested by Henry Weed, the first settler and proprietor of what is now the county seat to prepare a petition for a post office.  Desiring to perpetuate some of the favorite names of the fast vanishing race, he inserted the name of Pontiac, hence the name of the city.  Mr. Fell also named the county choosing the name of Edward Livingston a distinguished attorney and statesman, and Secretary of State under President Andrew Jackson."
Years of Inactivity & Rebirth

As the original members of the Historical Society began to pass away, the organization experienced a period of inactivity.  Little was done by the group from the late 1930s until 1963 when a revival took place.  The first meeting of the revived Historical Society took place on November 19, 1963.  At first meetings were set for twice a month, but later reduced to a monthly meeting only.  Slowly, our organization began to develop and grow.  New projects were considered, adopted, and seen to conclusion.  We hope to remain a vital part of our county and invite interested citizens to become involved.
Today, our meetings are held, in most cases, in the City Council Chambers at Pontiac City Hall.  At our meetings various reports are given, new projects discussed, and we include an educational component with a presentation on a topic of interest.  Meetings are held on the fourth Thursday of each month and are open to the public.

Since our organization was revitalized in the 1960s, we have accomplished much.  The Historical Society oversees the operations of three of Pontiac's most famous historic homes: The Jones House, the Yost House Museum, and the Jason Strevell House.  We have gathered an impressive collection of artifacts and histories that help us to tell the story of the early days of Livingston County.  A selection of these artifacts are now on public display at the Society's small museum, located inside the 1875 Livingston County Courthouse.  With an enthusiastic core of volunteers, we are constantly working to meet our organization's goals. 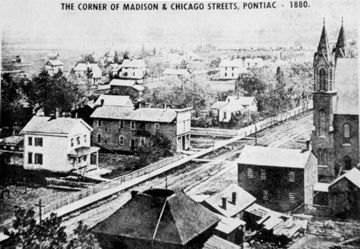 Those goals, as outlined at the 1963 meeting are:
" . . . to discover, collect and preserve whatever relates to the natural, industrial, civil, military, political, social, educational or religious history of Livingston County and to maintain a museum and library; to cultivate the historic sense and diffuse knowledge upon those subjects, by meetings and publications."