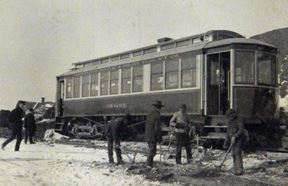 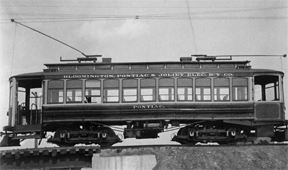 At a time in history before the Model T and paved roads, the leaders of Pontiac, the county seat, recognized the need for an affordable and regular rail transportation service that connected the small towns in the region on a more frequent schedule than that of the steam-powered railroads that traversed Illinois and the rest of the nation’s heartland (Chicago & Alton, Wabash, Illinois Central, etc.).

In the southern and central parts of Illinois, the 550-mile Illinois Traction System, which began in 1896, demonstrated many of the economic advantages of having a locally-oriented, electric rail service. With that model in mind, the Bloomington, Pontiac & Joliet Electric Railway Company began its life when a corporation was formed in 1904. 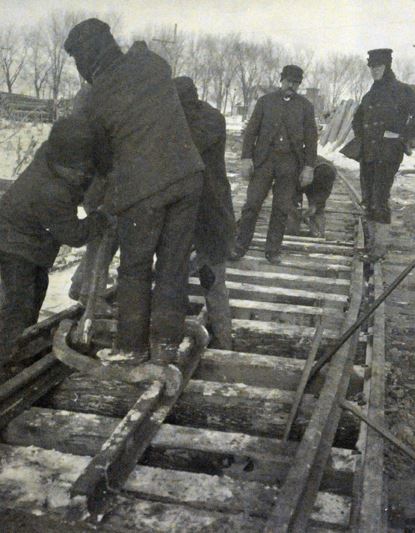 With the financial and entrepreneurial support of many local residents, the Arnold Engineering Company of Chicago began construction work on the BP&J shortly after the incorporation papers were accepted in Springfield. The roadbed construction was completed and the BP&J commenced its regular passenger and freight service on March 15, 1905. Notably, despite its optimistic name, the electric railway never exceeded about 20 miles in length, and connected to neither Bloomington nor Joliet.
The railway was a single track line with only a few turnouts and sidings. For most of its 20-mile length, the rails paralleled the Chicago & Alton Railroad's tracks. Because the terrain is so flat in the Pontiac area, there was a maximum grade of only 1%. New culverts and bridges were required, some of which are still in use today. There were two sets of power lines - one for use by northbound cars and one for southbound. The BP&J's  maintenance and storage building, known locally as the "Car Barn," was located in the northeast corner of Pontiac near the intersection of the three steam-powered railroads that passed through the city. 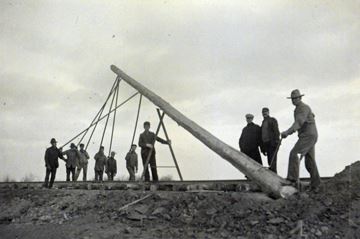 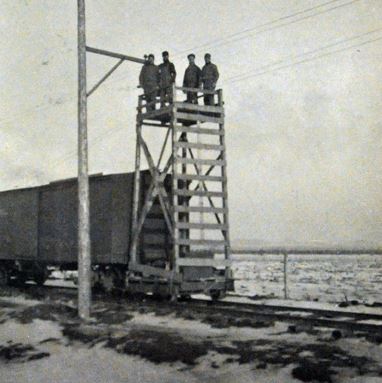 Passenger cars on the BP&J made eight trips per day, running from Pontiac to Dwight and back. Rural passengers could "flag down" the electric car at any point along the line, while residents of Pontiac, Cayuga, Odell, and Dwight had scheduled stops. The company had four motorcars, a freight motor car (flatbed), two passenger cars without motors (trailers), and one second-hand steam locomotive. In later years, they would add additional rolling stock, including a street car that operated in Pontiac. For those who rode the electric train line regularly, the BP&J acquired a special nickname based on the notoriously rough ride it offered. The "Bump, Push, & Jerk" was the more common way for locals to refer to the system.
Around 1907, the electric railway company built a public park between Odell and Pontiac. Their idea was that they would increase ridership by creating a new "destination attraction." Interurban Park was quite popular with the locals as it offered a variety of activities. There was a dance pavilion, playground equipment, a baseball diamond, bleachers, a concession stand, a picnic area, and plenty of large shade trees. On special occasions during the hottest days of summer, the Allen Candy Company of Pontiac would ship deliciously cold ice cream and freshly made candy to the park via the electric interurban railway.
On August 4, 1907, the BP&J suffered one of the worst railroad accidents in the history of Livingston County when two cars, returning from a ballgame at the Interurban Park, collided. Four people were killed and substantial damage to the two cars closed the system down for a period of time while repairs were made.
In 1913, the PB&J, as well as the Pontiac Light and Water Company, which owned the railway, was sold for $750,000 to the Public Service Company of Illinois. 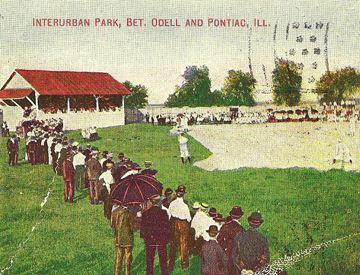 ​Unfortunately for the investors, the Bloomington, Pontiac, & Joliet Electric Railway was the victim of a revolution in transportation. With the rising popularity of the personal automobile and the development of an extensive system of paved roads, the usefulness of the Interurban was limited.
In 1916, the BP&J transported more than 182,000 people or an average of about 500 people per day. However, that was the peak year for the railway, and by the end of 1924 ridership had been reduced to about 20,000, or about 55 people per day. In August of 1925, the directors of the line asked permission from the State Public Utility Commission to shut the electric rail service down.
Permission was granted in November, and the last electric powered car finished its run to Dwight, returned to Pontiac and went into storage. Soon after the railway stopped operations, the tracks were torn up and salvaged, and the rolling stock either sold or destroyed.
The BP&J's 20 years of operation had a notable effect on the City of Pontiac. For many years, the electric rail system hauled freight and supplies to and from two of Pontiac's small manufacturers - The Allen Candy Company and the McMurray Canning Company. Loads of sugar, coal, empty tin cans, and salt provided by BP&J helped to keep these businesses operating and profitable.
The passenger service, likewise, was a benefit to local folks. For those living on isolated farms, a short, inexpensive trip to Pontiac meant an opportunity to purchase needed supplies and share the latest local news with shopkeepers and friends. When it came time to have some fun, the area's residents might have opted to spend the day enjoying sunshine and baseball at the Interurban Park. They might have even topped the day off with a picnic and dancing to live music there. For the people of Livingston County, the Bloomington, Pontiac & Joliet Electric Railway Company will always be remembered fondly. 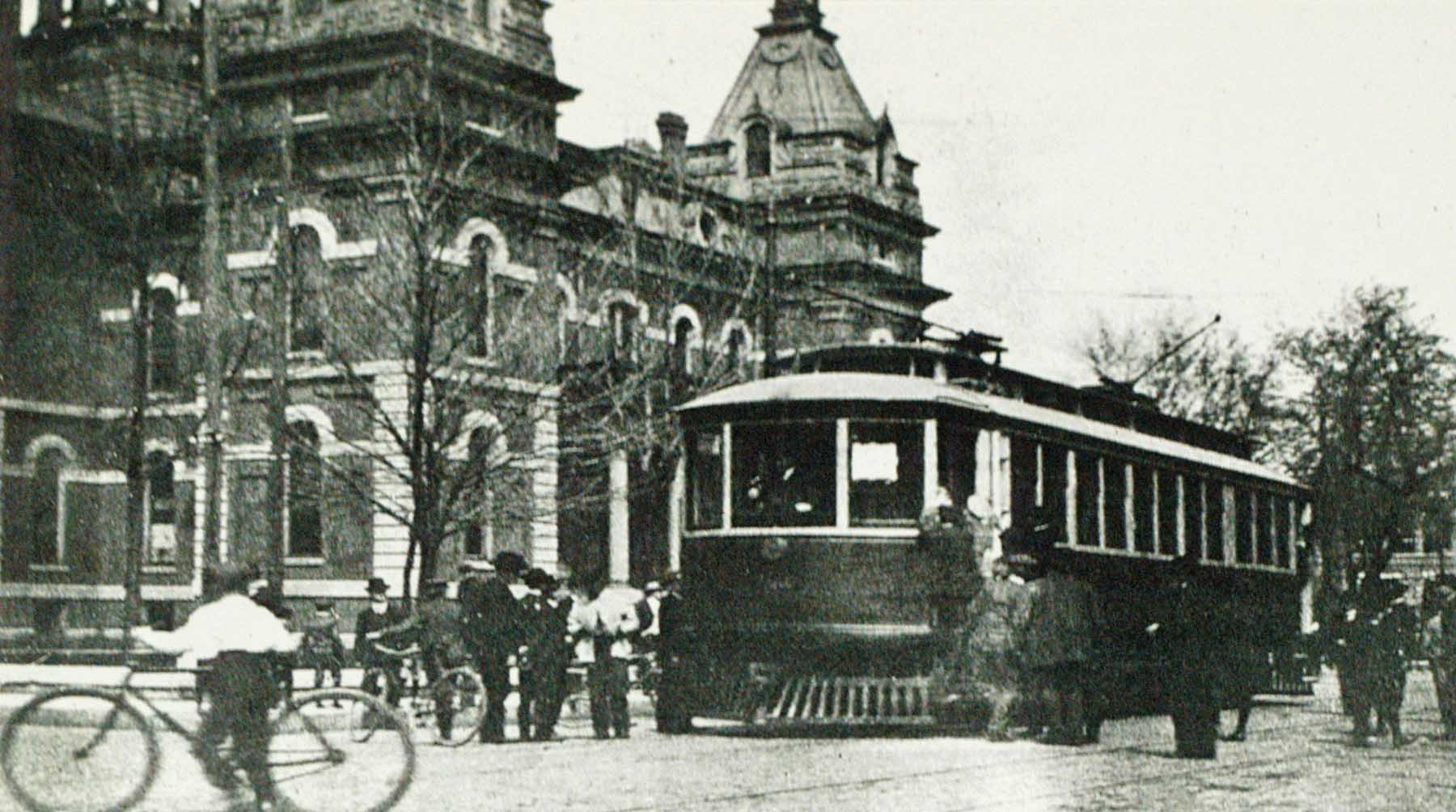